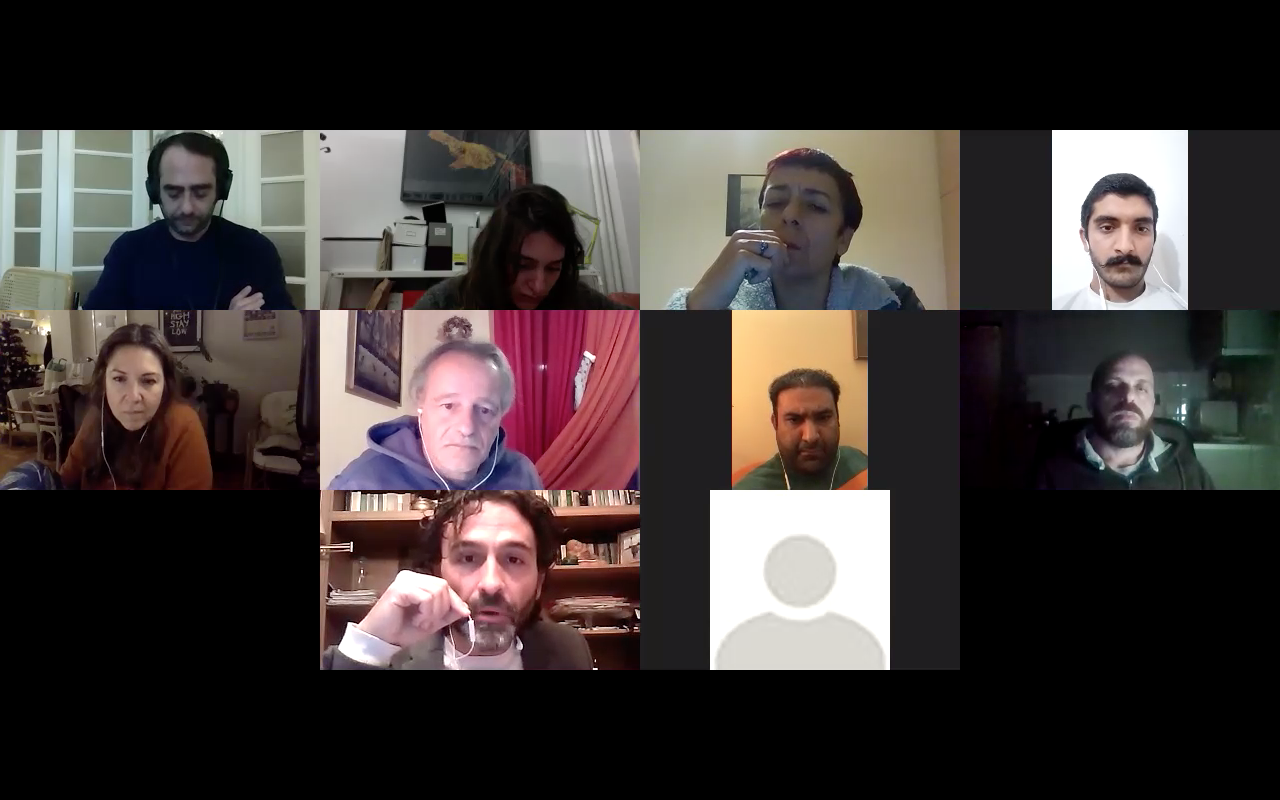 Encounter 2, The Open School for Migrants in Piraeus

This discussion, held in December 2020 between iLiana Fokianaki and members of the Open School for Migrants in Piraeus, examines the provision of collective care in the context of self-managed educational structures that provide free education for migrants and refugees in Greece. The Piraeus Open School for Migrants has been active in the field of solidarity education since 2005, taking the legal form of an association in 2006 with its ultimate aim being the educational and training support of migrants and refugees residing in Greece. The school is run solely by volunteers and strives to secure forms of self- financing in order to maintain control of the entity without outside influences.

The discussion explored the ways in which the relationships that are formed within the context of the school surpass traditional educational hierarchies. These are characterized by a fluidity that allows for care to be shared and equally provided between all members of the school, regardless of their “role” in this structure. Notably, students themselves teach classes in the fields that are familiar to them such as their own language a.o. Τhe school operates by abandoning traditional concentrations of power. As a result, the labor is not always equally distributed, and given that the school operates on a volunteer basis, some people might be overloaded in relation to others. For some, this was considered as one of the main drawbacks of horizontal organizational structures. Nevertheless, all speakers unanimously agreed that solidarity and collective care cannot be measured by any means and if hierarchical structures are enforced then different power imbalances emerge. Therefore, volunteers are encouraged to take on as many tasks as they feel comfortable with and this is generally accepted by the team.

Ιt became clear that the most important internal mechanism of the school is the open assembly. This usually takes place weekly, and sets the basis for decision-making, and determines all parameters that ensure the smooth functioning of the school, such as the delegation of daily and organizational tasks, the distribution of funds and bureaucratic and urgent matters. The assembly usually works by vote of majority; however, members mention that decisions are often made through extensive conversation. As Nikos – a founding member of the School- mentioned, the assembly is not just a formal process that has to be undertaken; above all, it is entwined with the interpersonal relationships that develop inside the School; relationships that need to be consistently nurtured and cared for. It is an empowering process, that enhances the sense of community and belonging. More specifically, the rotation and constant redistribution of power allows for everyone to have a say in crucial matters relating to the school. This is extremely important especially for migrant students, since in this way, they reclaim their right to ownership and responsibility and make decisions for themselves, something that the “host state” – in structures of the government for refugees- doesn’t allow. Mudassar and Umer, two migrant students and volunteers, also declared that the School wouldn’t be what it is without the assembly and they feel the school has been a home to them.

The concept of “αλληλεγγύη/ allilengyi” (=solidarity) and its political connotations, acquired in the greek context especially, leans heavily towards leftist and anarchist forms of organization and seems to be the driving force that allows for the school to operate in such an effective way. It does not merely serve the purpose of language teaching, but moreover it functions as an environment that would be best summarized in the terms of a “solidary community”. This community does not aim towards any form of cultural “integration” in a greek mono-culture, but believes in the osmosis between individuals and the exchange of different kinds of knowledge, reciprocal support systems, and care provision that circulates within and outside of the school spreading as an ideological and organizational paradigm. In times of urgency, often enough, issues such as legal advice and healthcare provision are taken care of by workgroups formed inside the school. As Thanos highlights, solidarity resembles a relay race, “you provide care for someone in order for that someone to provide their care for someone else in return.” In this way, solidarity as a form of organizing and collective care is an extroverted practice: it has the capacity to ideologically infiltrate the rest of the society, spreading in the form of daily actions of mutual care and support.